In a personal interview, Pandora tells how her debut single Trust Me has been a meaningful one for her also in a symbolic way. She takes us back to the moments before her life changed overnight and talks about setting new goals for herself.

Noora: In a way, Trust Me sounds very symbolic, if you think of it like that. 30 years ago you made a promise to never let us down, and you have kept that promise.

– I have done my best. I love those words in particular because in the past, I’ve had mainly lawyers fighting for me. For my whole life, I had to fight for myself until I met Mikko. Then I felt like this is the first time somebody is genuinely fighting for me, and he didn’t even do anything, except was there for me. I could and I can trust him 100 percent. So, yes, Trust Me was “meant to be”. It is very symbolic. It is my journey, Pandora states.

She adds how ‘trust’ has been a significant theme for her in other areas of her life as well.

– I have also had a good chance to see if I can trust myself and what my values are and do I stand up for them. No, maybe I always haven’t. Maybe I have been a bit of a coward in some ways. Maybe I have thought that my values are a bit too much. I always heard from here and there comments like: “Oh my god, you are overthinking this and so serious about everything. Can you just relax”.

Noora: That sounds familiar. I “overthink” everything in life.

– (smiles). But there is a reason for that, isn’t it. That is because you are authentic and you want to be professional and happy with things. It is for good cause, but if you have people around you who are always talking about it as if it was something bad, it makes you feel like: “oh, maybe I should relax a little bit”.

Pandora admits how earlier in her life she did not trust herself enough.

– I trusted others more than myself, even though I had a very strong gut feeling telling me so clearly not to, and that was a mistake I learned from.

“I was smiling for the first time in a really long time.”

Trusting God has been another important ‘trust’ factor for Pandora.

– That is when I felt like, ok, if there is someone in the whole world who does not have his own agenda or a second thought, it must be God then.

Pandora describes how in the beginning of 2000s the whole music industry was in a crisis due to the illegal downloading.

– That affected my business and my whole life psychically, mentally and financially. Then I somehow decided that I need help. I didn’t feel that I got the right kind of an advice from anywhere, and I didn’t have the money to pay for a therapist. I went to see the doctor and asked him to sign me a sick leave for a long time, but he didn’t think I was sick enough. Somebody asked me if I had tried church and “själavård” (transl. soul care). I even loved the word because my soul really needed some kind of healing.

She booked an appointment from the Lifecenter church in Västerås, and even though she was a little hesitant, she wanted to give it a try.

– Maybe after the third time of visiting, I was driving home and felt some kind of physical warmth or softness, like cotton around my heart, and I was smiling for the first time in a really long time.

She continued visiting the church and talking to the pastor until she felt she was back on her feet again.

– A few years later, I got baptized and that was a statement, like it’s between me and God now, and no one has anything to do with this. It was the first time I gave this kind of love to myself, that I am important, and I won’t let anyone treat me any other way anymore. So, that kind of ‘trust’ started then, Pandora explains.

Let’s jump back in time to the late 1980s when Anneli Magnusson was around 18-year-old music student. Peter Johansson from Hit Vision production team had just reached out to a teacher at Carlforsska gymnasiet because they needed to find a female singer with a special voice. The teacher didn’t hesitate to suggest Anneli.

– Even though it was always a clear path for me that music would be my life and career somehow, I never thought that my voice was that special. I didn’t even like it for a long time and kept comparing myself to the singers that I thought were better than me, Pandora reveals.

One of the first demos she remembers singing was called Marielle.

– It was synthesized based electronic music and sounded a little bit like Wham or Rick Astley. The music had more ‘80s sound to it. Then the guys discovered 2 Unlimited and got influenced by it.

When one of the producers moved to Stockholm and started working for an independent record label, their time had come. The people from the label were blown away by the demos but undecided whether the singer should be an unknown girl from Västerås or a famous model.

– They tested the models in the studio, but they were no singers, so it sounded like that. When they had tried them all, they came back to me and asked if I would like to front the project, and I asked if I could think about it...

Noora: But you knew already!

– ... I knew! (laughs). Later that day, I had a little bit of Baileys in my one room apartment, stood up in front of my mirror and said: skål Anneli, you are going to record an album.

In October 1993 Trust Me was released, and the rest is history, both personal history for Anneli “Pandora” Magnusson and music history in general.

– I was super excited to release the song, but also a little confused because the whole genre was so new. There were no real references to it. It was the beginning of the whole Eurodance era, and I wasn’t sure if anyone else than us would like it, but today I am very proud to have been a big part of the genre’s success.

Trust Me was an instant smash hit. It peaked at #3 in Sweden and ended up being the best-selling Swedish single in 1993. In Finland Trust Me peaked at #2 and it made it to the TOP 10 in Norway and Denmark. Outside Europe, Trust Me was a #5 hit in Israel and it also charted in Australia.

The Technoqueen was born, and Pandora has been rightfully referred as the pioneer of her genre ever since.

"My 30th anniversary will be a surprising one"

One article would never be enough to cover the achievements of Pandora. She has released 12 studio albums, sold the impressive 6 million records worldwide, received 21 Gold & Platinum Awards from three continents, toured all over the world for sold-out venues and maintained a genuine relationship with her fans. Still today she is one of the all-time best-selling solo artists in Sweden.

Noora: And 30 years later, you are not only still standing, but going strong and being very relevant. That is another achievement.

– Thank you for putting it like that because that is how I somehow feel. I have grown from being an insecure young girl, but still making a really big, nice career and trying to handle the whole thing, and of course it has been really difficult at times, but I have survived and come out stronger each time.

Pandora explains how she is good with setting goals for herself.

– Last time I took that step with myself in 2013 when I decided to break up with my son’s father in a matter of survival for me and my company. I had to be brave, and I promised myself that I will be my own best manager and when I am in my 50s, I will be in a good place in my life, and it has worked according to the plan.

This year she has set new goals for herself.

– I have promised to “level up” on every level: private life, work life, stage life, the music...

Noora: That sounds very inspiring to me. How are you going to celebrate your anniversary?

– My 30th anniversary will be a surprising one. It is not going to be just “one kind of a thing” throughout the year, but unexpected things will be happening every now and then.

Pandora is really looking forward to doing different things and making some of her long-term ideas and dreams into reality.

– I feel happy that I can challenge myself a bit. That’s a big part of being a creative person. You cannot be just stuck on one level. That kills your creativity, isn’t it so?

Noora: Very much so. Sounds like 2023 will be an exciting one, but please tell us, will there be new music?

– Yes, I will release new music and I will do different kinds of shows. That is all I can say about it now. It’ll be a fun year – trust me, Pandora teases.

Pandora's discography consists of several studio albums, a remix album, best of compilations, and a great number of singles.

This playlist contains 50 fan favorites chosen by the Pandora Lovers interviewed for Fanzone. 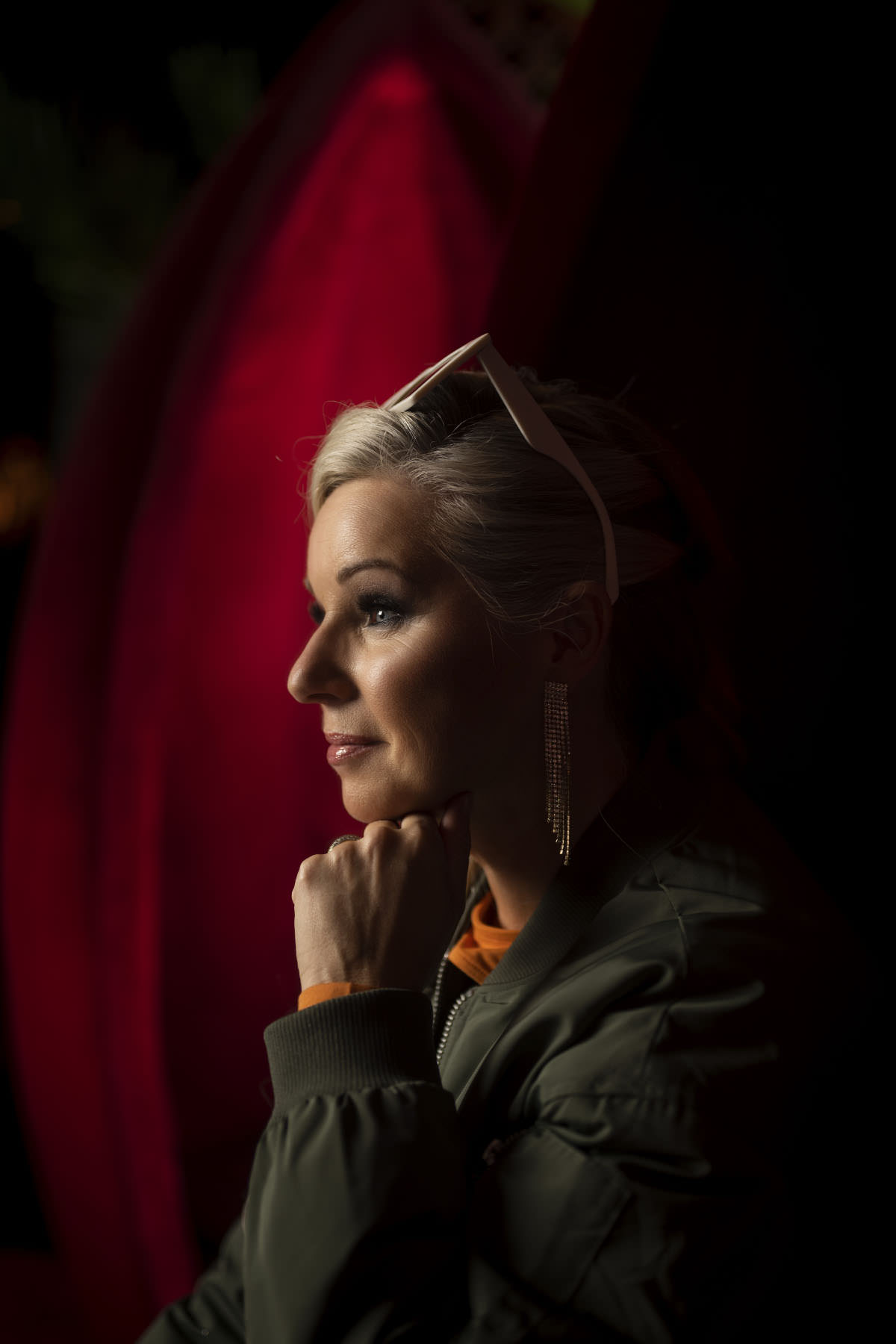 In the anniversary interview, Pandora reflects on the past and looks to the future. Picture: Jonas Bilberg.

Pandora with her first Gold Award only five years after finishing her music studies at Carlforsska Gymnasiet. Trust Me was released in late -93 and still ended up being the best-selling Swedish single in 1993, leaving behind The Sign by Ace of Base and many other hits of the year.