”I LOVE YOU” – An intergalactic love story from Finland

In April 2020, the year of the horrific corona pandemic, Pandora got contacted by the famous Finnish hip hop group Teflon Brothers. They had met once briefly backstage at a gig in Kaivuhuone, Helsinki, in May 2017. That was the moment the boys first got the idea to collaborate with Pandora. It would, however, take another two years and some emailing back and forth before they personally got in touch with her. 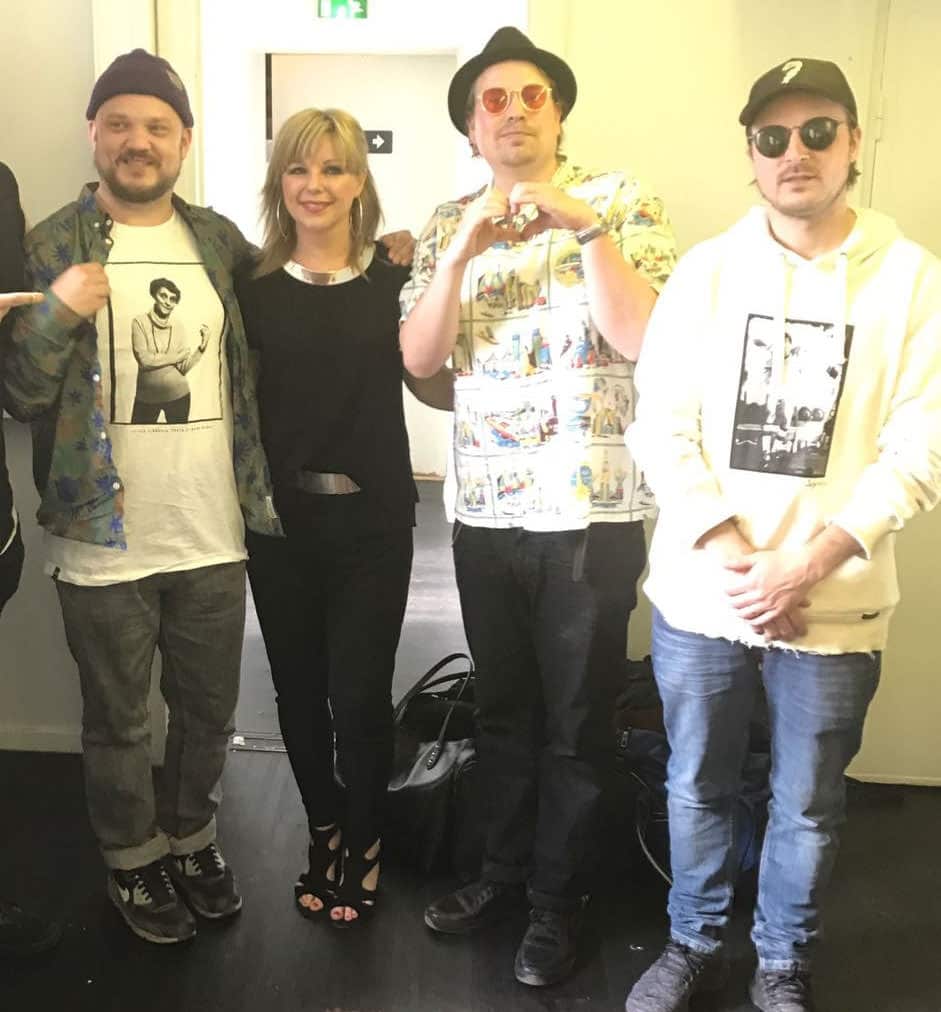 “At the first zoom meeting the boys explained that they love me and asked, a bit shy, if I would be interested in working with them on a mutual project. How could I say no to that?” I felt this whole thing would be a super fun and surprising step in my career”, Pandora says.

When all Pandora’s (like everybody else’s) ongoing projects and gigs got cancelled, this became the start of the “I LOVE YOU” song project and the plans to participate in the UMK FINAL 21 were a fact.

The 2021 entry to UMK would be Pandora’s third time aiming for the Eurovision (even though she promised herself to never participate again). First time in Melodifestivalen was 2003 with “YOU” in Malmö, second time 2004 in Gothenburg with “Runaway”.

“I think most artists have mixed feelings about Eurovision cause of the high stress level and how time consuming it is. Now I would be competing for Finland as the only international foreign artist. Of course I was honoured but the pressure got even higher! That’s why I said yes to Teflon Brothers and us as a team. We all felt strongly for our collaboration and could not wait to get started! 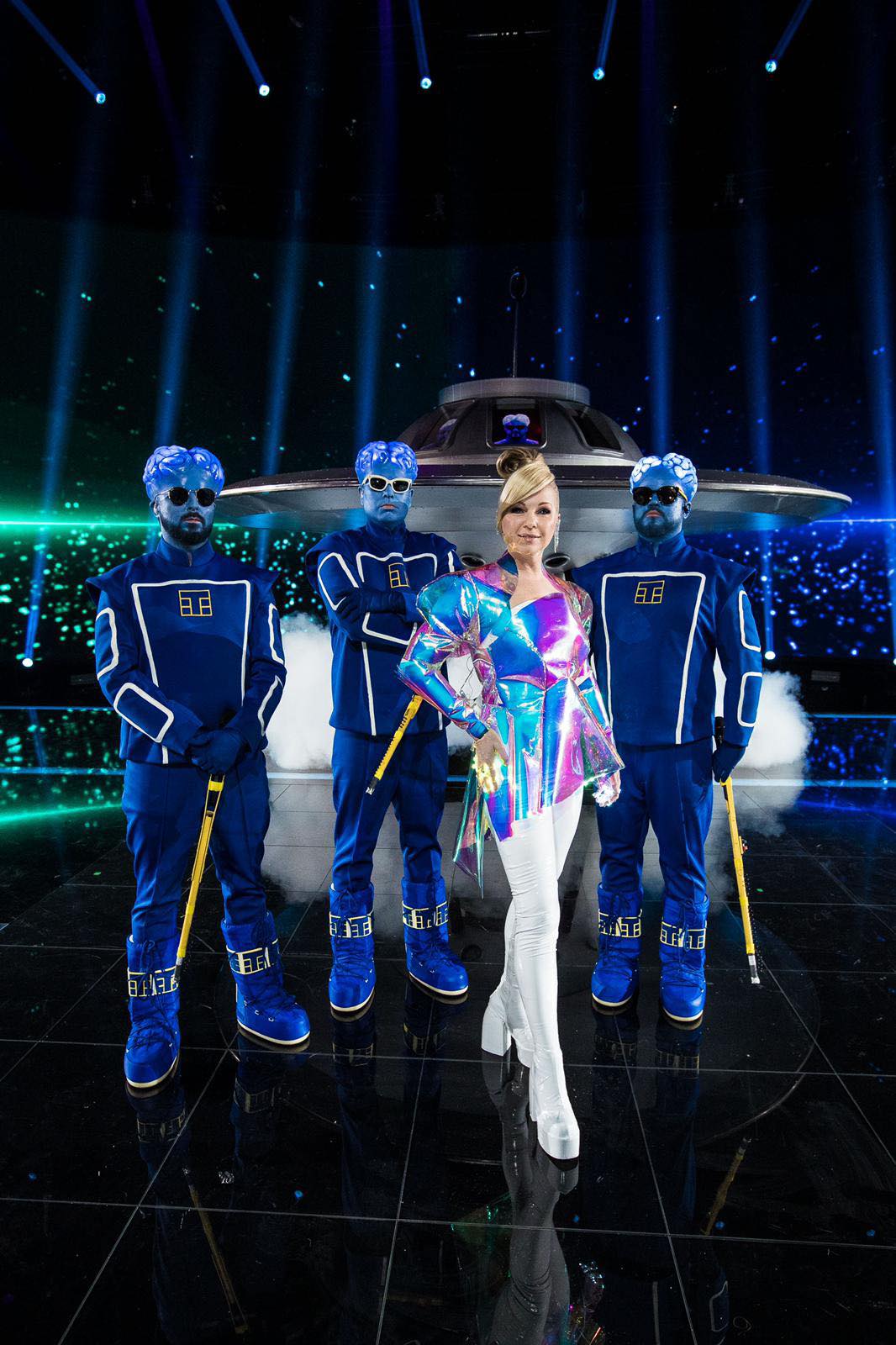 Starting a collaboration like this, in the middle of a pandemic with all restrictions that comes with that, had its challenges. Especially since Pandora lives her life in both countries. She has been tested for the corona virus more times than she likes to remember…

“It was important for me to be a part of the song writing to get the team feeling. I felt the song needed a few words summing up the message in English language since the boys are rapping about it (Finnish men’s communication problems) in Finnish. The song also needed a C part to not be too repetitive.”

The lyrics and melody for the passage that goes” I got your message, it’s a mutual attraction. It doesn’t matter, it’s a mental interaction”, was therefore written by Pandora (Anneli Magnusson). The original song was created by Axel Ehnström, Mikko Kuoppala, Jani Tuohimaa, Heikki Kuula. Jaakko Salovaara.

Pandora and the Teflon Brothers met irl together with their label Universal Music Finland for the first time in June 2020, when she recorded her vocals to the song produced by famous Finnish producer Jaakko Salovaara (JS16) that Pandora has worked with before with “Why Magistral”, “Drottningen Av Åland” and the new version of “On A Night Like This”.

Teflon Brothers concept is humour and artist collaborations. They chose Pandora for her voice and being a successful international Swedish artist in Finland, and also because they knew she understands the Finnish humour and culture due to her strong and long relation to Finland. In her career as well as in her private life, being engaged to a Finnish man.

“The general idea behind building a show like this was to make a 2021 show by telling the story behind the main message in the “I LOVE YOU” song in a sci-fi fairytale way, influenced by the 80’s and 90’s combined with our different careers. Something unexpected specially made for TV performance rather than a regular stage show kind of performance”, Pandora explains. 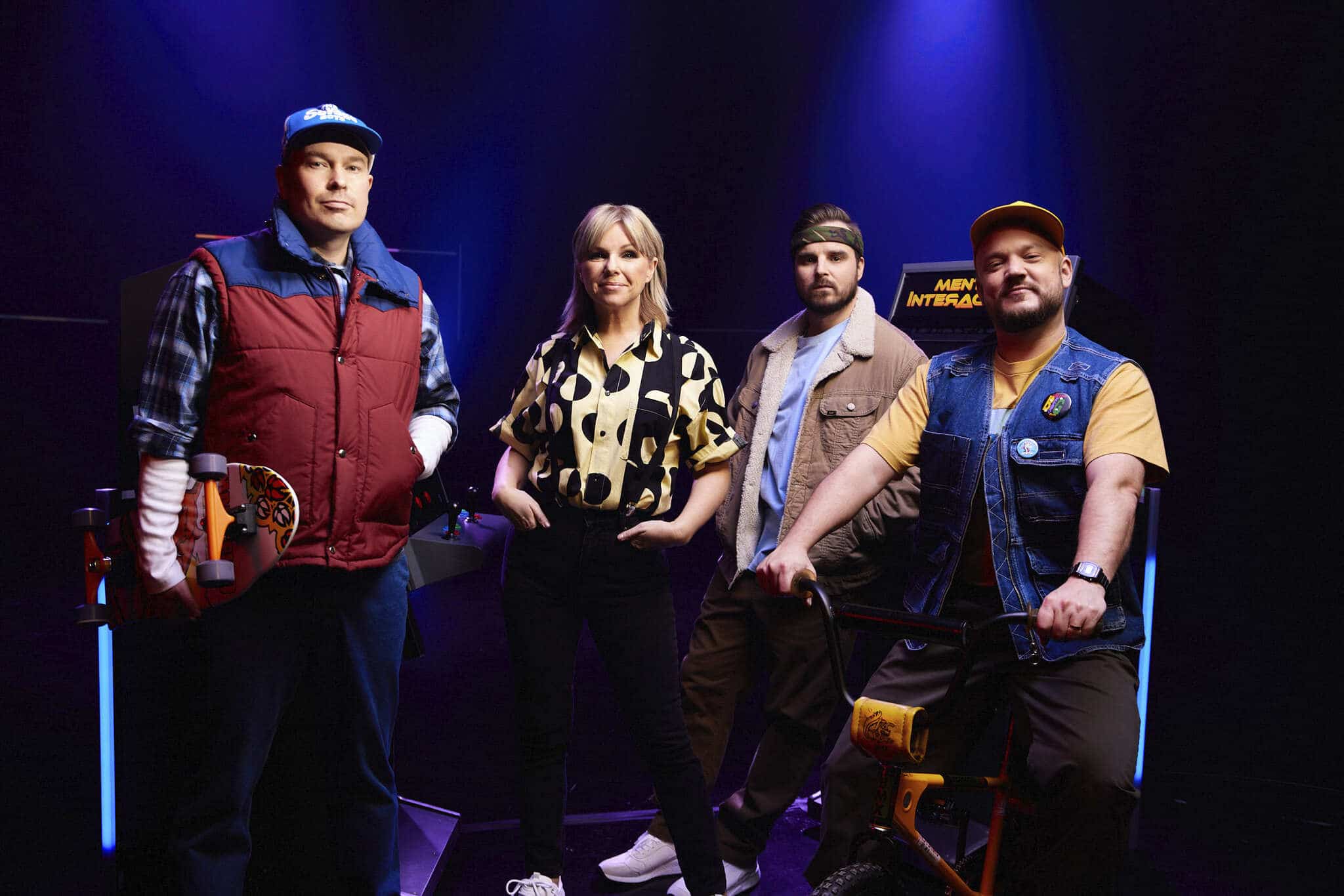 “Some of the ideas were to bring elements from my early Technoqueen career to a futuristic intergalactic Love Queen with superpowers, using influences like Eleven from “Stranger Things” and her boyfriends. 1996 I got an award from my label Universal Germany for 1 million sold cd’s on the “Planet Pandora”. So, we thought, let’s make a space theme with an amazing UFO entrance – like I actually did in Korea 25 years ago! Add some space garbage (like microwave ovens) as a time machine and three Finnish “minion aliens” (The Teflon Brothers) with big brains glowing of love, yet a bit shy, struggling to communicate their feelings in a language no one but Finns understand. Add space dancers, hologram and other special effects to make it more fun and space like!”

“The story ends with the Love Queen and her three “minions” creating a very cute spacebaby, visualized by firing off pyro and mental interacting. Of course, the first sentence that comes out of this little Finnish baby’s mouth is Mä rakastan sua! (I LOVE YOU)” 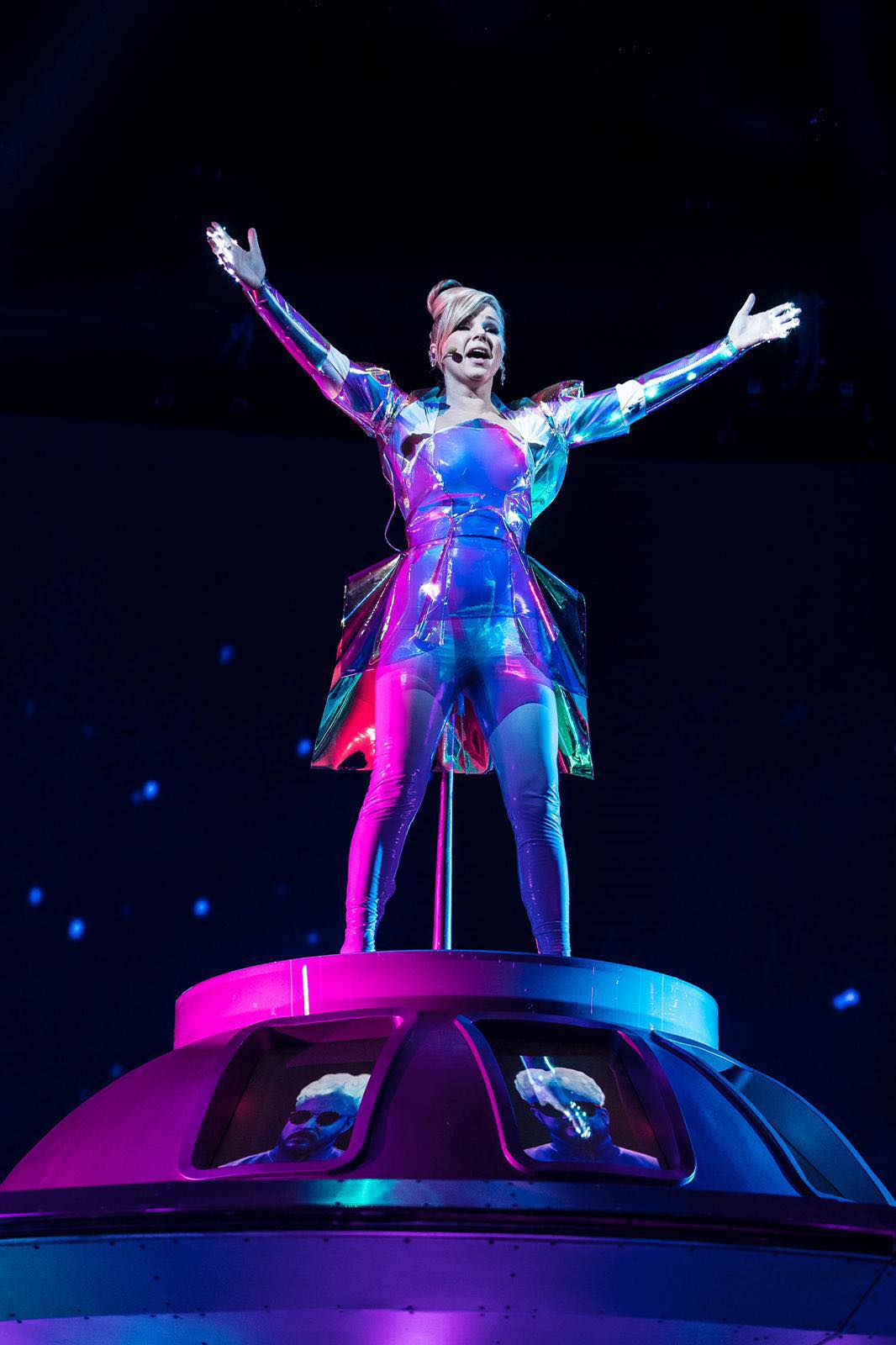 “The carpenters needed to make the UFO “door” bigger and have the ladders changed to be suitable for my big dress and shoes.”

The latex jumpsuit needed to be exchanged to a more flexible latex and many other details had to be changed to work perfectly with her choreography that she had created herself in collaboration with famous Finnish Choreographer Reija Wäre, who did the staging for this show.

“For safety reasons they built a metal pole and put a safety belt around my waist to attach me to the pole.”

The inside of the UFO was quite small, and Pandora had to sit bent forward while singing the first lines and before climbing up the ladder through the UFO rooftop hole. Once up there she needed to be attached (by a very fast crew) to the pole and start singing!

“This was the most stressful moment since it needed to be in perfect sync with the hologram version of “Pandora” beaming from a flash!”

Pandora’s hairdo was created by Finnish hairstylist Hanne Kuusinen and the ”space beauty” make up was made by Päivi Kela.

“We started our first session in November”, Pandora remembers.

It took 5-6 sessions before the Galactic Queen hairdo was perfect! The inspiration came partly from Pandoras relation to Japan and the space theme and of course, match the outfit with the right hair colour, feminine edge and kindness mixed with a modern twist!

The colours blue, white and yellow/gold was important to represent both the artists countries, Finland and Sweden. The uniform style, their logo, sunglasses and moonboots were there to show a UFO crew feeling and Teflon Brothers as a group. The hand microphones were built in with the pyro. Their glowing brains were handmade by YLE staff and extremely hot to wear after some time, as well as the moonboots! The Teflon Brothers clothes were created by Finnish Jaana Björklund and Nina Jatuli, Elina Lario & Teemu Muurimäki.

The idea was to have the Finnish heavy metal band Lordi involved in this concept since they are the only Finnish band ever winning the Eurovision in 2006. At that time Kimmo Valtanen, the currant CEO of Universal Finland and Teflon Brothers x Pandoras label, was Lordi’s CEO at Sony BMG. The amazing “I LOVE YOU” single artwork is therefore painted by no less than Mr Lordi himself.

On the night of the competition, Teflon Brothers x Pandora got to go on stage first of the seven acts participating. That moment was also the first anyone outside of their team and the YLE crew saw their show, which, to put it mildly, did not go unnoticed. The UFO and the hi-tech features, like Pandora’s special outfit, all the colours, the lights, the hologram, graphics and the special effects, was a smashing combo with the happy message of love performed by the artists.

When just one act still hadn’t gotten their votes from the tv viewers, Pandora and Teflon Brothers were in the lead. After a nerve-wracking long wait, the host finally announced the outcome. The intergalactic love story was beaten by the “violent rock” band Blind Channel and their song “Dark side”.

“Of course, we were in it to win. Was it worth it? If you ask me, I choose love over the dark side every day of the week! We could have been a real good candidate for the Eurovision 2021. Don’t you agree?”

During the month leading up to the UMK final, Pandora featured the biggest magazines covers and was exposed in all the biggest media in Finland. The single was released 15th of Jan 2021, peaked at #2 on both the single chart and Spotify. It actually set a UMK historical record as the fastest climbing song! It reached GOLD (2 million streams in 40 days) and is still keeping a top 3 position after seven weeks on SPOTIFY!

Pandora is back on the charts now planning for the next step in her almost three decades long career. You can all be sure that she’s got a lot of exciting things coming.